“Is that a pistol in your pocket, or are you just glad to see me?” This quip is universally credited to Mae West, from as early as 1936, and there have been variations: pipe, rod, banana. As a device that emits, a pistol is metaphorically more descriptive than a banana. A man who is sterile is said to be firing blanks.

Arising from the same general shape and location, the rocket metaphor takes the penis beyond sex to other realms of male excitability. The Jets want revenge, and testosterone urges action. Hence the call to be cool (heat being a metaphor for emotion).

The timeliness of Sondheim’s rocket metaphor is noteworthy. The USSR launched Sputnik in 1957, and the rivalry for turf in outer space was on. 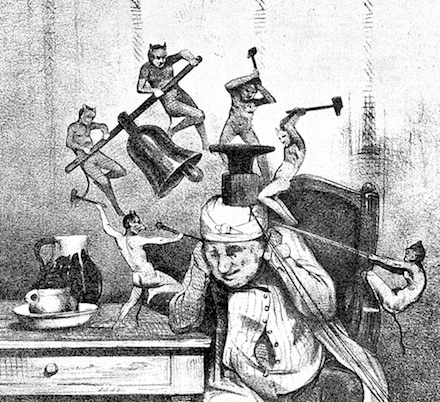 In Babylon, and throughout human history, people have pictured evil spirits as the cause of headaches. Even today, a lot of headache imagery supposes an external agent inflicting pain – often with tools from the carpenter’s shop:

A giant wields a rusty saw. He gloats and hums as he works, slicing through my forehead and into the mind behind it. – E. Lockhart, We Were Liars (2014)

His headache was still sitting over his right eye as if it had been nailed there. – Ian Fleming, Moonraker (1955)

When the tools are not piercing or cutting, they may be squeezing or pounding:

…it is sometimes said that the “top of the head appears to open and shut,” or that someone seems to be “holding the head in a vise,” or “pushing a screw into the top of the head,” or that the head feels “as if it were swollen,” or “bursting.” – Harry Campbell, Headache and Other Morbid Cephalic Sensations (1894)

The pain is generally referred to the top of the head, and is frequently described as resembling a “ticking,” or the beating of a small hammer on the skull. – Henry Goode Wright, Headaches (1867)

The opposite of the “head in a vise” headache might be the “splitting headache,” an expression that is sometimes connected playfully to the birth of Athena from the forehead of Zeus. In one version of the story, Zeus asks Hephaestus to crack open his forehead with an ax to relieve his Olympian headache. Novelist Mortimer Collins uses the expression less loftily in Sweet Anne Page (1868),describing a hangover:

…he awoke with a headache – a splitting headache, that seemed capable of splitting a tough planet into infinitesimal fragments.

A throbbing headache, though it keeps time with the body’s own pulse, may evoke hammering, splitting, or shattering. The Nurse in Romeo and Juliet says: “Lord, how my head aches!…It beats as it would fall in twenty pieces” (II.5.48-49).

When a headache is very bad, the sufferer may think of surrendering his or her head altogether. In Egyptian mythology, Horus prays for his head to be taken off and exchanged with a new one. In her 1992 memoir Woolgathering, Patti Smith recalls a pounding headache that “got into that crazy realm where the guillotine seems like a good idea.”

Rarely, headache imagery is animal rather than mechanical, and native to the mind rather than imposed by a torturer. In Erika Swyler’s “The Mermaid Girl: A Story” (2016), headache is a disturbance in the landscape inside one’s head:

Headaches were like birds. Starlings. They could be perfectly calm, then a single acorn could drop and send the entire flock to the sky.

In Excedrin commercials from the 1960s, a crusty old man compared his headaches to “two bull goats” ramming each other. He put the knuckles of his two fists together to illustrate.

Sledgehammer is a common metaphor for overkill. Occasionally you hear more elaborate constructions with a high-tech twist:

These are verbal counterparts to an old Looney Tunes gag about an entire tree being saw-milled down to a single toothpick (“Lumber Jerks,” 1955), and all are descendants of Rube Goldberg contraptions, reflecting our mixed feelings about science — a combination of awe and mistrust. (To see an example, google “Rube Goldberg fly swatter.”)

The ultimate metaphor for overkill is nuke, short for nuclear weapon and, since 1984, a verb for cooking in a microwave oven.

[The] issue was not only off the table, but had been completely blown out of the water.

Later it became the elephant in the room that was not on anyone’s radar.

In uses like this, “backfire” refers to the tendency of WWI rifles to explode rather than shoot.